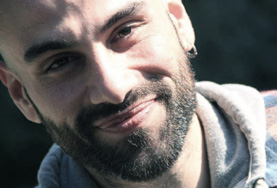 Syrian rapper and writer. A Homs native, Sawah first came to Beirut in 2012, when he was invited to perform in a showcase for Arab rappers, and since then he’s become a recognized figure on the scene. He has been writing for as far back as he can remember and began rapping in 2004. Two years later, he recorded his first track and released his debut album “Ard Al Samak” (Arabic for ‘The Land of Fish’) in 2016 in which he talks about the Arab Uprising and the Syrian people’s revolt. Since moving to Beirut, Sawah has split his time between production and making music full time and expanding his reach. Sawah’s work speaks to young people in the Arab world who he most wants to support and while he keeps his focus close to home, he is also concerned with global issue.