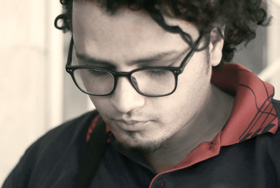 Born in Douma, Damascus 1994. He studied sound engineering and music but could not complete his studies due to the siege on Eastern Ghouta where he remained until the forced displacement of 2018. Inside Ghouta, he documented the daily stories of the besieged civilians and since 2013 he’s been serving as a field photographer contributing to reporting from inside the siege to a number of news agencies. During this period, he also served as director and sound engineer for “Rusol”, a studio in Douma, as well as a broadcaster for local and international radio stations. He is a member of Sam’s Lens and Rusol Group (Digital Forum) and founding member of “Humans in Syria” project. He has contributed to the filming of a number of short and long documentaries latest of which was the feature documentary “Still Recording” 2018 and is recently directing his very own short film.