Article
After the Constitutional Council annulled the parliamentary membership of al-Mustaqbal Movement MP Dima Jamali after an appeal submitted by rival Taha Naji,  Tripoli had to hold bi-elections to reelect a member to fill the Sunni seat.
By Noor Baalbaki 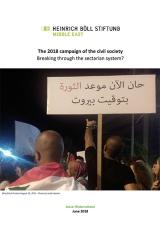 All you need to know about the Lebanese parliamentary elections

Dossier
It has been nearly a decade since Lebanese citizens last had the opportunity to go to the polls and cast their votes. The current parliament had been extending its mandate on three separate occasions mainly due to several reasons starting from not agreeing on a new electoral law to the ongoing war in neighboring Syria. Finally, in summer of 2017 a proportional law was agreed on and elections finally will be held on May 6 of this year. With elections approaching we have put together this dossier that would help the voter keep track of everything they need to know about the elections.

Are the Lebanese Happy? Corruption and Resilience in the Light of the Parliamentary Elections

Article
Lebanon, often described as the Paris or Switzerland of the Middle East, and still considered safer and more stable than most Arab surrounding countries, is constantly under threat of falling apart due to its political instability and corrupt politicians. Although many Lebanese have lost their faith in their political leaders, it seems that the politicians themselves are eager to go through with the parliamentary elections. The only plausible explanation is that the politicians are confident that their supporters will eventually give them their votes, perhaps for lack of better alternatives.
By Noor Baalbaki

Bente Scheller to Al-Jumhuriya: Europe should not expect concessions from Assad

Interview
Alex Rowell from Al-Jumhuriya speaks to Dr. Bente Scheller, director of the Heinrich Böll Foundation's Middle East office, on the recent German elections and their likely impact on European Syria policy, the ongoing debate over Western participation in the future reconstruction of Syria, threats faced by Syrian refugees both in Europe and here in the Middle East, recent military developments against ISIS and other actors in Syria’s east and north, and much more.
By Bente Scheller

The Federal Elections for the German Parliament

On September 24, federal elections for the German parliament will be held. Heinrich Boell's Paris office summarizes the process in this animation video

Dossier: More Than A Talkshop