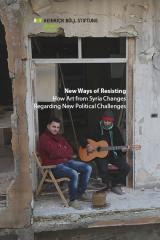 New Ways of Resisting: How Art from Syria Changes Regarding New Political Challenges

During the war in Syria, artists played a big role in keeping the fight for freedom alive via peaceful and creative means such as street art, film-making, and documentation at a time when traditional media continued painting the picture as one of hopelessness. Their work has paved the way for possibly new strategies through which they could seek justice against crimes committed by the regime.