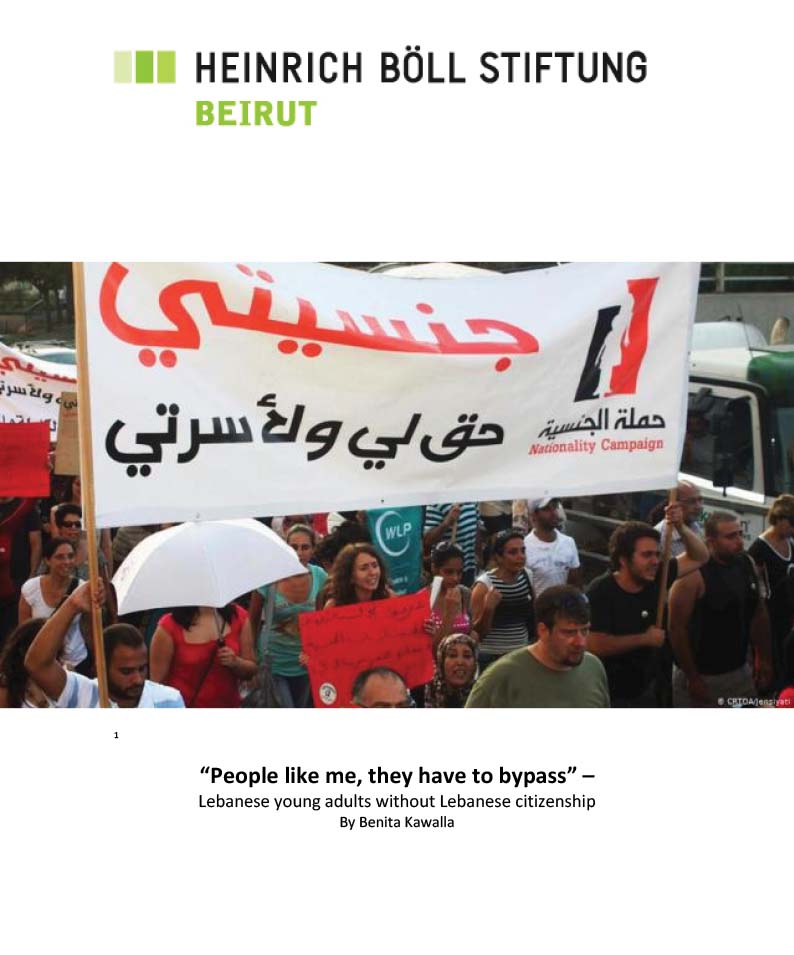 What does it mean to live in Lebanon without Lebanese citizenship even though your mother is Lebanese? Benita Kawalla pursues this question in her paper “People like me, they have to bypass- Lebanese young adults without citizenship”: The paper examines the situation of young adults, children of binational parents in which the Lebanese mother cannot transmit them her nationality because of the restrictive Lebanese nationality law. Using the concept of performative and affective citizenship, she claims that these young adults perform their Lebanese citizenship by political and social activism for a more inclusive citizenship law, by finding coping strategies to exercise basic human rights and by feeling Lebanese and stating their right to be legally Lebanese. 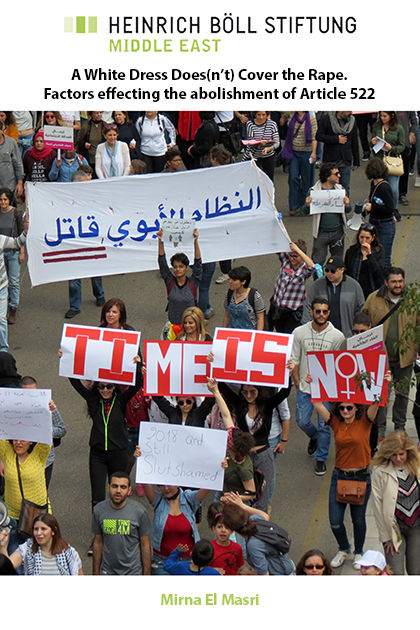 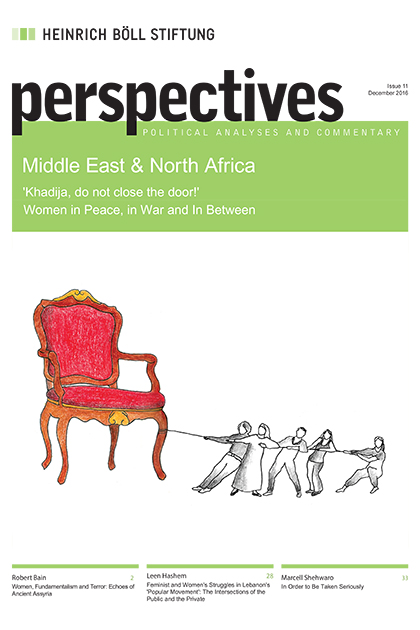 Khadija, do not close the door! - Launch of perspectives #11

The Heinrich Böll Stiftung Middle East has the pleasure to invite you to the launch of the 11th issue of Perspectives:“Khadija, do not close the door!” - Women in Peace, in War and in BetweenWednesday, December 14, 2016, 7 pmDar El-Nimer for Arts & Culture, Clemenceau, Beirut

Beyond the Logic of State Protection: Feminist Self-Defense in Cairo after the January 25 Revolution

In the aftermath of the January 25 Revolution, self-defense tactics became popular against the fear of disorder and the increase of public sexual violence in Cairo. In this article, I examine a number of examples of self-defense invoked by public and private actors after the 2011 Revolution, and differentiate between two types of practices. The first, articulated around the right of legitimate self-defense recognized in the Egyptian penal code, aim to maintain or to restore the established order through the identification of an Other that embodies a threat to the self, property or community. In contrast to this, radical modes of self-defense endeavor to subvert the given order by disrupting the gendered logic of masculinist and state protection and promoting horizontal relations of care and solidarity. Drawing on data generated through interviews with members of the initiative OpAntiSH and the collective WenDo, this article explores the importance of strategies and communities of autonomous self-defense in Egypt in relation to legal and policy measures adopted against sexual harassment by El-Sisi’s regime since 2014.
By Susana Galán

This paper examines how Saharawi feminist political praxis shapes community organizing and national liberation politics. I attempt to disrupt the binaries of national liberation and freedom through a reading of the political and temporal context of the engagements of National Union of Saharawi Women feminists in the refugee camps, in Tindouf, Algeria. From ethnographic encounters, the paper aims to challenge the linearity of violence in armed conflict by looking into nuances and politics of feminists who challenge the equation of national liberation as state-building, and simultaneously argue for more just and inclusive forms of organizing for the Saharawi community. This research looks at Saharawi feminist politics and visions for the future that are vigilantly articulated from within militarized institutions and protracted armed conflict.
By Kenza Yousfi

To Be the Daughter of a Lebanese Woman

On the day they removed her name completely from my official papers, my existence was transferred from her “guardianship” to the “guardianship” of my employer, whose name is on my residence card. Struck with fierce bitterness and sadness, I felt as though I had been shattered, like our house. My mother said to me: “It is as though I didn’t give birth to you, or as if I am not Lebanese. It is as though I mean nothing at all.”
By Sahar Mandour

Lebanese mothers give their children life, but not nationality

The Lebanese constitution stipulates that all citizens, male and female, are equal before the law in terms of their rights and duties. Karima Chebbo, who runs the legal unit of the My Nationality is a Right for Me and My Family campaign acknowledges that the reality is very different and that the country’s laws contain aspects that are unfair and inequitable, shedding light on the situation of Lebanese mothers married to foreigners being denied the right to pass on their nationality to their families.
By Maya Jabaei

The issue of quotas has been subject to a long debate in the last years. contributing to this rich and important debate, Barbara Unmüßig explains how quotas are proven to be a successful tool for full equal political and economic participation.
By Barbara Unmüßig